Compact in size and with many versatile features 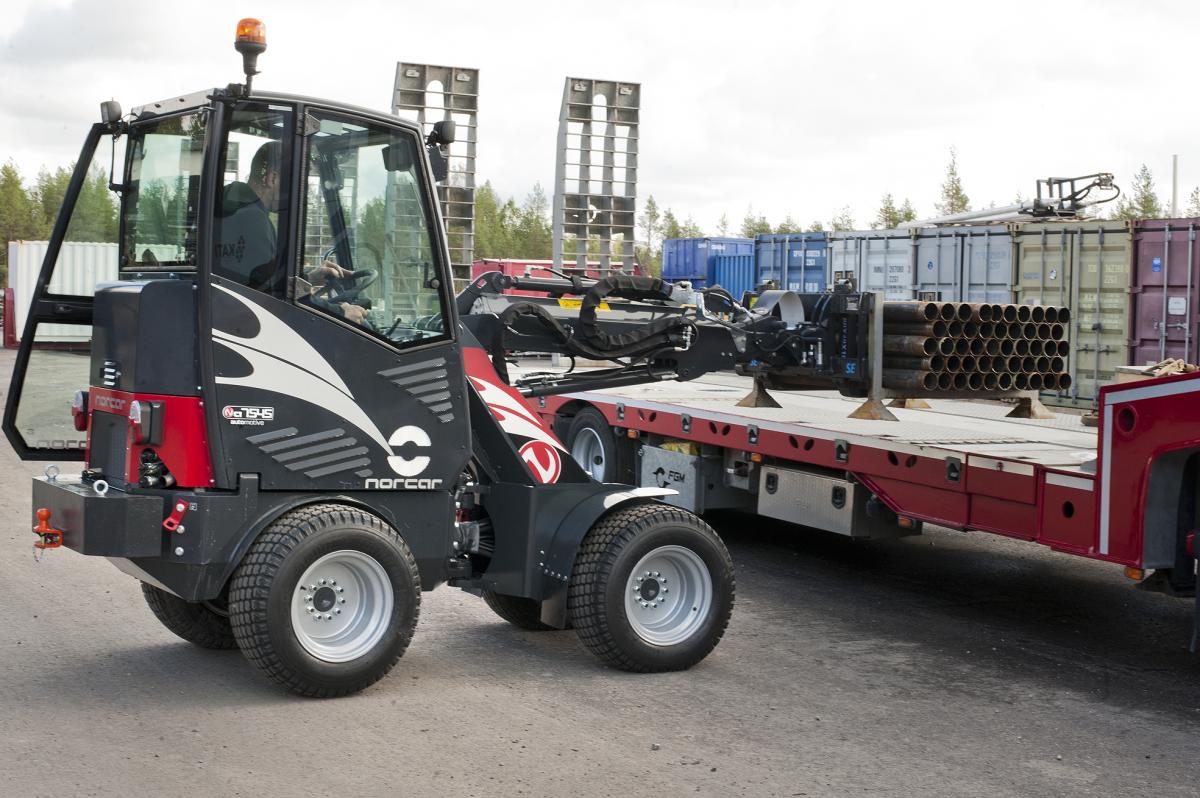 Mineral exploration requires high-quality equipment that is easy to maintain and easy to service with easily available spare parts. Headquartered in Rautio, Kalajoki, the staff of Kati Oy thoroughly explored the various options available when purchasing a Norcar a7545 mini loader.

Founded in 1980, the second-generation family business has been a pioneer and forerunner throughout its history in benefitting diamond drilling methods for exploring for ore. The company conducts mineral exploration for mining companies and other companies, especially in Finland and Sweden. Over the decades, there have been plenty of international sites, including Greenland and the Sahara.

- We currently employ about 130 people. In addition to a skilled workforce, our competitiveness is based on a good fleet of machines, says Tapani Niskakangas, Chief Operating Officer of the company.

There are several options for trial use

Because machines play a key role in KATI's success, machine procurement is carefully planned. This was also the case when purchasing a new mini loader, when the company started looking for a machine for logistical needs.

- We wanted to consult extensively with our employees' opinions before making the final decision. There were several alternatives to test, and the differences between the machines in the test run were well reflected. With the seven test users, Norcar was voted for 6-1, Tapani Niskakangas tells about the procurement decision.

According to him, at the end there were numerous reasons in favour of Norcar's mini loader. One of them was its versatility, because the machine is capable of performing many tasks. In addition, the loader can be equipped with tracks. This allows for new in the future requirements, such as the use of a lifting fork in off road terrain.

- The compact size of the machine and the articulated chassis ensure traction on all wheels. Then the weight is distributed evenly, and the ground is not broken. Norcar was by far the best in terms of usability. Smooth reversing was one of the features we really liked. Accelerating by the foot pedal for driving is economical and energy efficient. Visibility is good, and safety is considered for example, Niskakangas lists the selection criteria. 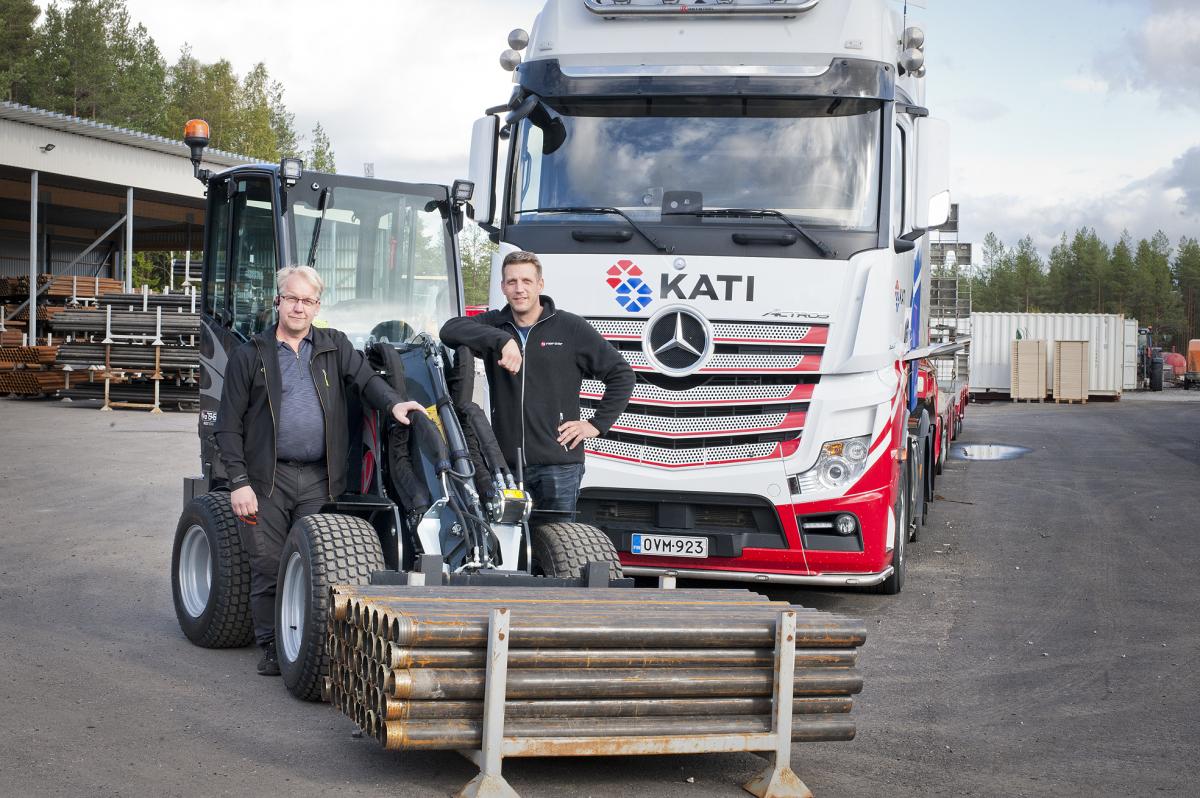 In September, Tapani Niskakangas (right) and other Kati Oy personnel got to use a Norcar mini loader sold by Ojan Rauta Seppo Sorvari (left).

The Norcar mini loader weighs approximately 2,000 kilograms, has a lifting capacity of 1.5 tonnes and a lifting height of 3.5 meters. Tapani Niskakangas also praises its versatile attachments.

- We can do all kinds of things with just one machine, quite soon there will be completed a 2,600-square-foot maintenance hall, which will be completed soon for looking after the landscaping. Compact in size but high in power, the machine is capable of transporting materials packed on pallets even far from unloading points.

Flexibility and cost-effectiveness will be improved. When goods are transported to other locations in Finland or even Sweden, there is no need any more to order an external operator for unloading at the destinations. Norcar goes handily with the rest of the cargo.

- In addition, the ease of machine maintenance and the availability of servicing parts are of great importance to us. The factory support is above all others. As a Finnish manufacturer, we always have a clear address where we can get the information that we need. It is even possible to have a factory representative present so that we can solve the problem and ensure that the work continues.

- Delivery was on time and otherwise as agreed. In the first week the machine was already in Örebro, Sweden and Sodankylä, and now it is going to Kiruna. 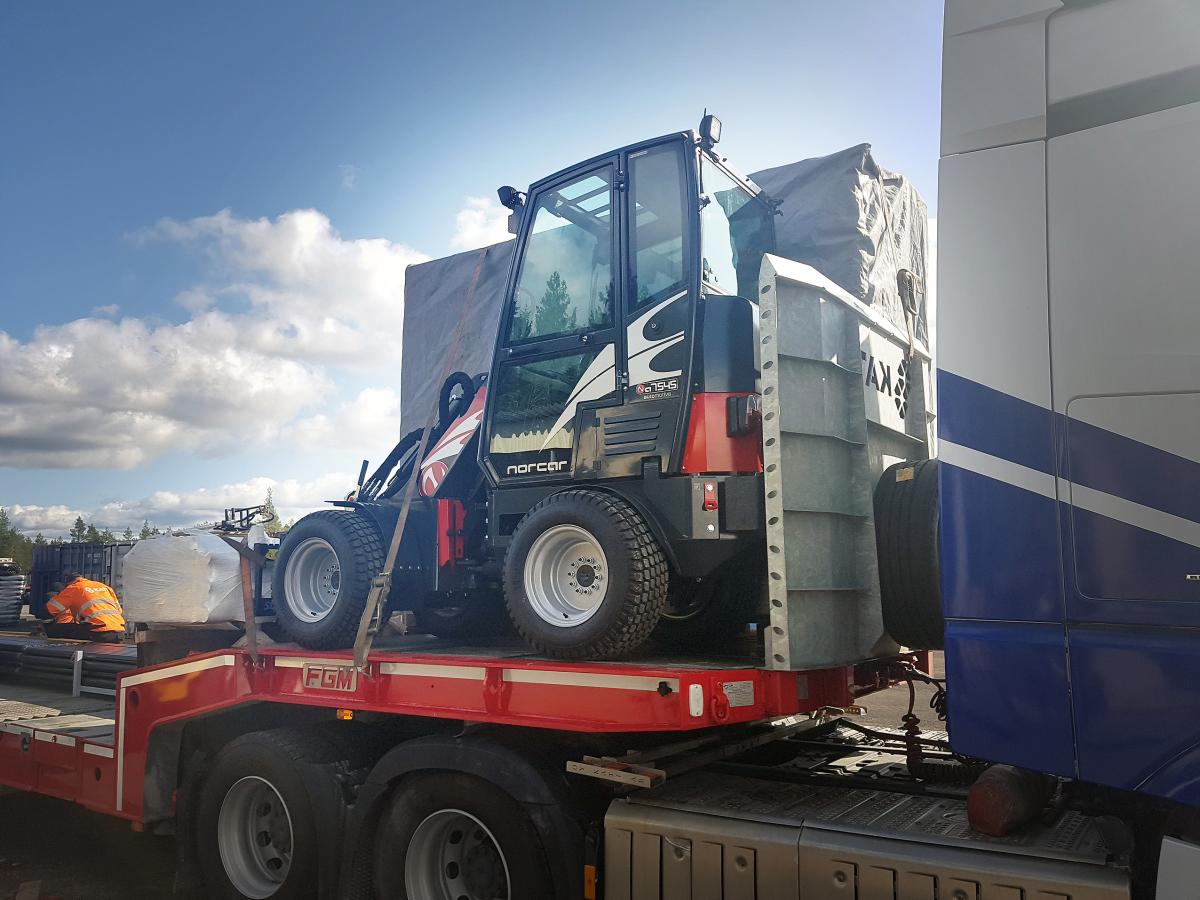 Doing business with respect for nature

The business of the family company emphasizes quality work and equipment, as well as occupational safety and the environment. KATI certified its environmental management system in accordance with the ISO 14 001 standard already in 2004, as the first player in the industry in the Nordic countries.

- Work is done with a priority of occupational safety, and immediately after that comes the environment. We do diamond drilling with a closed-loop system that takes environmental consideration to a whole new level, says Niskakangas.

The amount of water used in the closed loop will be reduced by recycling and the mineral aggregates separated from the water for drilling can be packed and transported away. The company also educates its staff on environmental issues, cleans drilling sites, uses biodegradable hydraulic oils, and sorts and recycles everything possible.

KATI's story as one of the Ostrobothnian success stories began in 1980 when Teuvo Niskakangas and his brother in law Timo Rautakoski founded at Kalajoki Timanttikairaus Ky.

According to Tapani Niskakangas, the operations of the family company are still guided by the same principles as at the beginning: efficiency, development of operating methods and drilling equipment, respect for nature and winning of customer trust.